When They Call You a Terrorist: A Black Lives Matter Memoir

Patrisse Kahn-Cullors and asha bandele’s memoir When They Call You a Terrorist is a coming-of-age story that reveals the depth of racial targeting and its impact on Black families and neighborhoods during Kahn-Cullors’ time growing up in Los Angeles.  The book also explores the ways in which these experiences led Kahn-Cullors to co-found Black Lives Matter with two other women.

Join Peter Eichten and Ann Manning for a rich discussion of this book with its focus on racial injustice perpetuated by America’s War on Drugs during multiple presidents’ terms and the effects this policy had in criminalizing a generation of Black people.  The class will also look at the work white people, especially, have to do to uncover and change the messages in this country about Black people and criminality.

Join us for this two-part session, via Zoom. 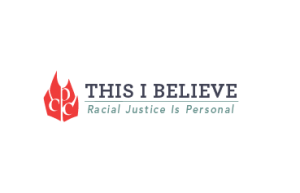 This I Believe | Racial Justice Is Personal

is being launched by Plymouth’s Racial Justice Initiative. Our goal with these personal stories is to inspire reflection and action, and we offer them with humility and vulnerability. We hope these stories will inspire deeper thought about your own relationship to systemic racism.
We have recently begun publishing these video stories in weekly emails.
To receive the emails including these videos please contact dougf (at) plymouth.org.
For questions or to include your story in
This I Believe | Racial Justice is Personal
please email Jean Kennedy jekennedy21 (at) comcast.net.

lives out our faith by accelerating Plymouth’s actions to heal pervasive racial injustice through individual, congregational, and community transformation.  RJI’s goals are threefold:  to deepen our personal awareness of white advantage in systemic racism, to fuel our commitment to actions that address racial injustice through a spiritual, honest, and compassionate approach to ourselves and others, and to pursue opportunities to work with organizations led by Black, Indigenous, People of Color and other allies committed to fostering racial justice in our communities.
Contact: Ann Manning at anncmanningmn (at) gmail.com or Barb Iverson at barbiverson100@icloud.com

The RJI is always looking for volunteers to assist with programming activities.  Topics and sub-committees include the following:  building working and personal relationships with organizations and fighting systemic racism; partnering with Isaiah and other local organizations on voter enfranchisement efforts; reforming police and improving public safety; communicating to the congregation about how people can get involved; fostering the congregation’s curiosity about U.S. history and dismantling the narrative about white supremacy, American exceptionalism and the history of race relations; promoting congregational dialogue through Racial Justice Circles and other ways; inviting speakers on racial justice topics; providing support and racial justice resources; cultivating a relationship between the RJI and the Immigration Welcome Working Group; enhancing resource offerings with books, articles, podcasts, movies and encourage internal reflection; leading book reviews; and encouraging members to share their personal experiences and to understand their own white privilege.  Please contact RJI co-chairs Ann Manning at anncmanningmn (at) gmail.com or Barb Iverson at barbiverson100@icloud.com

Have you ever asked the question: “What can I personally do to recognize my white advantage and become more antiracist? I really care about this, but I don’t know where to begin.”
Whether you’ve been involved in racial justice issues your entire life, for a couple of decades, or just a few months, the podcast series “Seeing White” is a superb way to familiarize yourself with how the concept of whiteness has shaped our nation.

All Plymouth members are invited to listen to this series at their own leisure and to then join a Zoom discussion on each episode on the third Thursday of each month from 7:00 to 8:15 p.m. Registration for the monthly podcast discussions is not required, and you do not need to attend every session

Review the Podcast
Join the Discussion