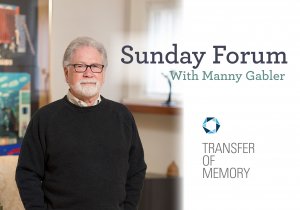 Presented in collaboration with the Board of Fine Arts

Sunday Forum with Manny Gabler, a Holocaust survivor who is featured in the exhibit.

By 1937 it was obvious to Simon Gabler that he and his pregnant wife could not stay in Germany. As Hitler’s plans to make Germany judenrein “cleansed of Jews” progressed, they knew that they would either have to leave the country or they would end up in a concentration camp. So their journey began. From Chemnitz, Germany, to Milan, Italy, where baby Manny was born, on to Genoa, and finally to the only escape possible for refugees without travel documents; Shanghai.

When the family landed in Shanghai, Manny was only one year old. His memories of the war come from his nine years living in Hongkou.

When you live through an experience like this. “I think you get a really deep sense of who you are. There is a satisfaction in just knowing that I have survived and done okay.”