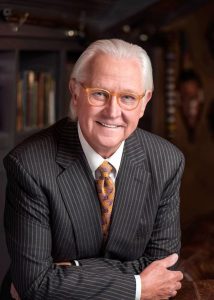 Don Shelby is widely considered the most decorated and honored local television journalist in the country. He has won three national Emmys, the Columbia-duPont, the Scripps-Howard, the National Distinguished Service Award from the Society of Professional Journalists and he has been honored twice with the Pulitzer Prize of broadcasting, the George Foster Peabody.

Don continues his 55 year career in reporting after retiring from daily journalism in January of 2011. He continues to practice journalism and

is often read in Salon and dozens of other internet news aggregators. He now specializes in environment and science reporting, and lends his time to the Climate Scienc

Don was inducted into the Broadcasters Hall of Fame in 2008 and into the National Academy of Television Arts and Sciences Silver Circle. He was named the Reverend Dr. Martin Luther King, Jr. Humanitarian of the Year, and honored by B’nai Brith with the Great American Traditions award. In 2010 he was named Distinguished Minnesotan, an honor he shares with other luminaries such as Sigurd Olson and Will Steger.

Don’s reporting has taken him around the globe from Romania to Egypt, Venezuela, Australia and the Arctic Circle. He originated the I-team concept of investigative reporting and served on the board of directors of Investigative Reporters and Editors (IRE), the county’s preeminent investigative journalism organization.

He has served as a war correspondent covering conflicts ranging from the Yom Kippur War in 1973 to the war in Iraq in 2009. Major General Richard Nash, commander of forces in the southern half of Iraq called Don, “…our Ernie Pyle,” referring to the noted combat correspondent of World War II.

Don is the author of The Season Never Ends, a collection of stories about teamwork. It is currently ranked as the #2 best seller in the coaching section of Amazon.com. He is in the middle of writing his second book on the developing failure of American journalism to meet the needs of voting citizens in a democracy.

Don continues to stretch himself. He starred in a two-month run in the Rocky Horror Show live in Minneapolis. One reviewer called it the “Show of the Year.” He has appeared in the Mixed Blood’s production of “Safe at Home” staged at CHS field this year, and has performed with the top Guthrie actors in a production of “8”.

He serves on 13 boards or advisory boards, is a frequent lecturer at journalism conferences, including an appearance in September at the national convention of the Society of Professional Journalists in Los Angeles. He is the capital campaign chair of the Smithsonian Institution’s “Bias Inside Us” traveling exhibit. As head of the capital campaign for the Washburn Center for Children, Don led a team that raised more than 25 million dollars for children with mental health issues.

He performs as Mark Twain in a one-man show and has been appearing as Samuel Clemens throughout the Midwest, but his most recent show was in New Orleans, Louisiana, and travels each year with the choral group VocalEssence in River Songs and Tales with Mark Twain.

Don is an avid outdoorsman and a primitive survival specialist. He spends much of his free time climbing icefalls, mountains, hiking and canoeing his beloved BWCAW. He has a wife and three grown daughters, and their families.