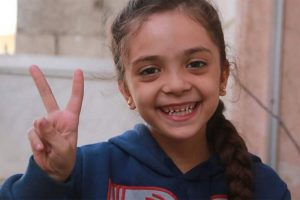 For over a decade, Syria, a country in the Middle East, has been in the midst of a brutal civil war. In 2016,Bana al-Abed, only 7 years old, began sharing messages about the war in her home country through her mother’s Twitter account. Her mother had been an English teacher, and Bana had dreamed of being a teacher too, before the war forced her to stop going to school. Sharing info about hunger, lack of electricity, missing school and friends, and how the war made her feel, her tweets captivated the world, giving people a chance to learn about what was happening from a very different perspective than what they read in newspapers. Bana and her family eventually were able to escape from Syria to Turkey, and became Turkish citizens. Bana continues to write and speak out against war, particularly its negative impact on children and families.

Why do you think Bana’s story was so powerful? How might a kid talking about violence and war make people pay more attention than an adult talking about it? Bana got a lot of support from her mother to help her get her story out–what are different ways that your family supports you?

Closing prayer: Dear God, no matter if we are big or little, we have lots to say that people need to hear. Amen