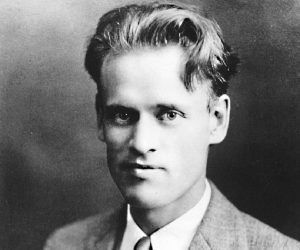 Think of three inventions that you think most people are thankful for–was one of them TV? All over the world, TV helps people learn about what is happening within and outside their community, see stories of different people, learn new languages, and be entertained. In 2021, it is hard to think of life without TV, but a hundred years ago, the idea of watching moving images in a box in your house wasn’t even a possibility. A young boy named Philo Farnsworth was already taking apart and putting things back together in his house–he figured out how to create an electric washing machine so his family didn’t have to wash all of their clothes by hand, repaired a broken electric motor even though he’d never seen one before, and got intrigued in the different ways sounds and images could travel between people after having his first-ever telephone conversation. While there isn’t an easy way to explain the science behind Farnsworth’s invention, he is credited as the inventor of key pieces of telephone technology. He was actually planning on enrolling in the army to help pay for schooling after his father died and he became financially responsible for caring for his mother and younger siblings. However, once he found out that inventions he created while in the military would be the property of the U.S. Government, he chose not to enlist. He wanted to make sure he got the credit and any financial windfall for his inventions, which was a wise decision that greatly helped him and his family. Every time you turn on a TV and that bright, clear picture appears you can thank Philo’s curiosity and commitment to helping connect the world through images!

To learn more about Philo: https://www.youtube.com/watch?v=i9g3KQOEsa0

What do you think it was like for people, the first time they saw the moving pictures and heard the sounds of a TV? How can TV help people around the world learn more about one another?