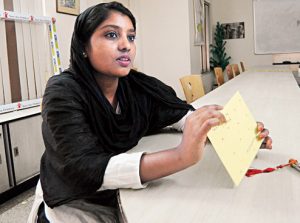 When you hear the word traffic, you probably think of being stuck on a highway or busy city street, with lots of cars around you, and none of the cars seem to be moving at all. That is an explanation of traffic, but if you hear the word trafficking, it usually means to do something against the law, to move animals or people from one city or country to another without their permission. Often people, typically very poor people, are taken to another country to work as servants, maids, do childcare, pick crops, or other jobs, and they may not receive any pay for this, essentially making them slaves. Sadly, this happens to too many people, particularly children, every year, including our hero of today, Anoyara Khatun. When she was only 12, Anoyara was taken from her home and sent away to be a domestic servant (a housekeeper, cook, maid, etc.) for a wealthy family. She was rescued by an organization called Save the Children, and able to return home, but she realized that her case was not rare and that children all over India, and the world, were experiencing trafficking every year.  With help from Save the Children, Anoyara started discussion groups for children, run by children, all around the region where she lived to help kids have a better understanding of what trafficking is, how it could happen, and ways to prevent it. After getting these groups started, she wanted to do more. She has worked with Save the Children to rescue 185 other children from trafficking, helped prevent multiple child marriages, and registered hundreds of children to attend school, many for the first time! She has received India’s highest honor for her work to end trafficking, but she has said she will not stop until every child is able to have the childhood they deserve.

What are some of your favorite things to do at school? How do you think those children who Anoyara rescued felt, when they no longer had to be a servant, and got to go to school for the first time?

Closing prayer: Dear God, Every child deserves a childhood and no one deserves to be trafficked. Bless Anoyara and others who help give children back their childhoods. Amen.