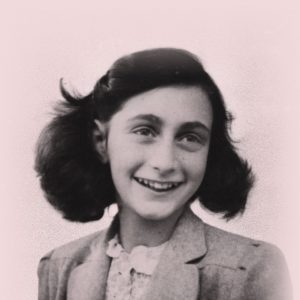 During World War 2, Jewish people in Europe were not safe. Adolph Hitler, the leader of the Nazis, wanted to kill all Jewish people. In order to stay safe, Anne Frank and her family hid for over 2 years in a secret set of rooms hidden behind a wall in her father’s former place of work. During that time, Anne continued her schooling, and also wrote in a diary, which became one of the most well-known accounts of life under Hitler and the Nazis. Sadly, Anne and her family were arrested in 1944 and sent to a concentration camp (a very horrible place, like a prison for mainly Jewish people) and she and her sister died from an illness and lack of medical care just a few months later. Anne was only 15 when she died, but her words help millions of people around the world, especially children and young people, understand not only the terrifying life Anne and her family (and many Jews) had to lead, but also how bravery, creativity and intelligence helped people like Anne make it through their experiences.

Can you imagine living in a space as small as only one or two rooms in your house, and never getting to go outside, for 2 years? What might you do to keep yourself busy?

Closing prayer: Dear God, let us never forget the horrible things that people have done to one another. By remembering them, it helps us make sure they don’t happen again. Amen