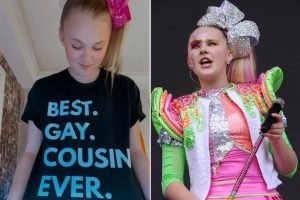 Many people are familiar with Jojo Siwa, whether it’s because of her big personality making her a breakout star on reality TV and Nickelodeon, her songs that kids can’t get enough of, her youtube channel, or her giant hairbows. At only 17 JoJo created a brand that was a lot like her, colorful, sparkly, confident and full of personality! She was even listed as one of Time’s most influential people in 2020 and millions of tweens and children look up to her. She has always taken her job as a role model very seriously. Even though she is an older teen, and could choose to dress and act in a more adult way, because so many of her fans are kids, she has said it is really important to her that she remains relatable to them, and doesn’t encourage them to act to grown-up too soon. Early in 2021, JoJo came out as part of the LGBTQ+ community, sharing on her various social media platforms that she feels the happiest she has ever been. For many adults and young people who identify has queer, her coming out is very momentous. A young person with so much influence, showing herself as happy, authentic and empowered in her LGBTQ+ identity is extremely powerful, and JoJo will most certainly garner even more fans now.

To hear why her coming out is so meaningful for the LGBTQ+ community: https://www.usatoday.com/story/entertainment/celebrities/2021/01/26/jojo-siwa-coming-out-lgbtq-community-matters/4250186001/

Closing prayer: Dear God, Let us create a world where everyone has the power to be joyfully, unapologetically themselves. Amen.