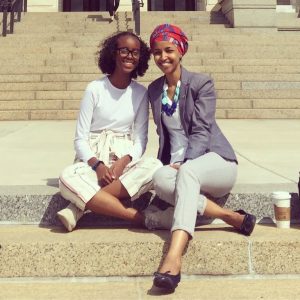 Like other young activists we have featured, Isra Hirsi was also inspired by Greta Thunberg’s work on climate, but her activism is something she feels she was born into. Isra, a high school senior at Minneapolis South High School, is the daughter of Ilhan Omar, who is a member of the U.S. House of Representatives and also “the squad,” a group of young, progressive, politicians of color who are working to make significant changes in government that will improve society now and for future generations. With the support of her parents, Isra has been confident in herself and her part in the work for justice since she was young. She has marched and spoken out about gun violence and racism in the aftermath of the murder of Jamar Clarke, co-founded a Youth climate justice organization, and passionately speaks about intersectionality in climate justice, seeing it from her perspective as a young, Muslim woman of color. Though she won’t even graduate until this year, Isra is thinking about the generations below her, just the way her mother does. Isra is inspired by her younger sister, and does her work to give her sister a safe and healthy future.

To learn more about Isra: https://www.youtube.com/watch?v=X_WRe-9ArNI

To learn about Isra in her own words: https://www.youtube.com/watch?v=zHvH6ArQV4o

Isra inspires her mom, and is inspired by her little sister. Who is someone who inspires you? Do you think you have ever inspired anyone? How would you like to inspire others?

Closing prayer: Dear God, Thank you for surrounding us with inspiring people, and allowing us to be inspiring to others. Amen.