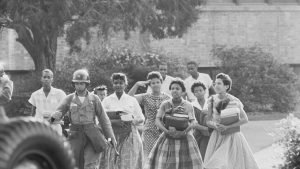 It wasn’t so long ago that separating people in schools, stores, on busses, and at drinking fountains, was not only expected in many places in the United States, particularly the South, but actually LEGAL! In 1954, a landmark Supreme Court Case, Brown v. Board of Education ruled that school segregation was illegal and unconstitutional. However, just because the court said schools needed to desegregate, didn’t mean that the change happened quickly. It took nearly 3 years of work by the National Association for the Advancement of Colored People (the NAACP) to put into motion Black students actually attending and integrating white schools. In Little Rock Arkansas, 9 African-American students; Minnijean Brown, Elizabeth Eckford, Ernest Green, Thelma Mothershed, Melba Patillo, Gloria Ray, Terrence Roberts, Jefferson Thomas and Carlotta Walls, were selected by community leaders to be the first high schoolers to enroll at Little Rock High School. They were selected because of their calm, strength, and ability to withstand the bullying and violence that would most likely befall them during the integration. On September 4th, 1957, the teens attended their first day of school. During the coming weeks they had to be escorted into the building by the National Guard, and endured taunting, racist slurs, getting spat on, and getting hit and kicked. Still, they persisted in attending school daily, effectively integrating Little Rock High, and paving the path to integrated schools across the country. 8 of the 9 students are still alive today, and received a Medal of Honor from then-president Barack Obama for their bravery.

To learn more about the Little Rock 9: https://www.youtube.com/watch?v=Qk1tTCk2Kks

To learn about Brown v. Board of Education: https://www.youtube.com/watch?v=BBKX-FyQWaE

What do you think it was like for the Little Rock Nine as they had to walk through angry crowds every day to go to school? Why do you think school is so important that people all over the world are willing to endure extreme hardship to go?

Closing prayer: Dear God, no one should have to fight to go to a good, safe school. Thank you for our education, and may we help others have access to education too. Amen.