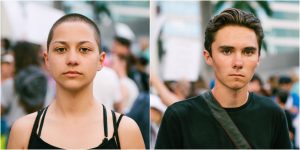 On February 14, 2018, Marjorie Stoneman Douglas Highschool in Parkland, Florida was the site of a horrendous tragedy–17 students were shot and killed, with 17 more injured, all victims of gun violence. Out of this horrific event, students from the school, including Seniors Emma Gonzalez and David Hogg, became outspoken activitists and proponents of gun control reform. These brave students, in the face of incredible terror and grief, founded March for Our Lives, and their first demonstration, which took place in Washington D.C. only 5 weeks after the tragedy, drew 800,000 participants, and became the blueprint for other modern-day demonstrations including the Women’s March.

To learn more about Emma Gonzalez David Hogg and the other teen founders of the March for Our Lives: https://www.youtube.com/watch?v=brKK9Vi3mSU (content warning: does mention the school shooting and the large death toll).

Can you imagine talking in front of 800,000 people? That is a really huge number! What is something that you care about so much that you’d use all your bravery to talk about?