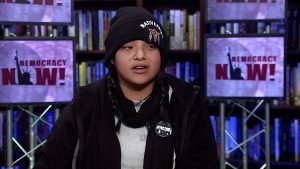 Jasilyn Charger, a member of the Cheyenne River Sioux tribe, experienced a lot of sadness as a child and teen. Growing up on a reservation*  many friends and acquaintances were struggling with mental health and trying to deal with it by using alcohol and taking drugs, stealing, fighting, and some of them even killed themselves. This is not uncommon in Native American communities dealing with the trauma of generations of abuse and neglect by “American society.” Jasilyn was surrounded by people crying out for help, and she was on a path to become one of them. A cousin, who was only a year older than her, had gotten very involved in social justice, and organizing in their community. He encouraged her to make a different choice and helped her get involved in youth activism and opportunities at their local community center.  She and friends got deeply involved in the One Mind Youth Movement to give other young Indigenous people on their reservation bigger views of their future and their potential. When the Keystone XL oil company was planning to run an oil pipeline through sacred lands and waters at Standing Rock Sioux reservation, a call went out to Indigenous communities nationwide to come and help support the occupation of the land. Jasilyn was one of the first people to answer the call and was part of the Standing Rock protest, including leading a group of Native Youth to run 2,000 miles to hand-deliver a petition to the US government and then-president Barack Obama, asking them to stop pipeline construction through sacred Native land. After that experience, she co-founded the International Indigenous Youth Council, to get the message of youth empowerment, social justice and activism out to even more Native youth, offering them new options for their future.

*A reservation is a small piece of land “given” to Native American people to live on and govern, after the majority of their ancestral land was taken away by the US government through treaties and wars. Reservations can often be in isolated locations, and have less access to money, jobs, services, and infrastructure (road maintenance, internet access) than other communities.

To learn more about Standing Rock, through the eyes of a young water protector: https://www.youtube.com/watch?v=WA0sR6RA4zQ

How does hearing about some of the things that have happened to Indigenous people make you feel? How can we learn more about Native history, and how can we support Native people in the Twin Cities, and elsewhere?

Closing prayer: Dear God, so much has been taken from Native people, and they continue to persevere. Help us find ways to support and amplify their work and their voices. Amen.