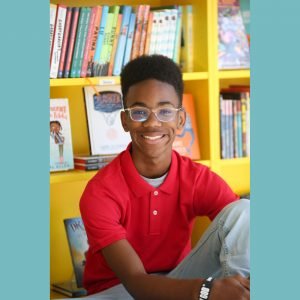 If you checked in with yesterday’s Hope hero, you know that in books, representation matters. Marley Dias wanted to see more black girls and women in stories, so she created #1000BlackGirlBooks. Sidney Keys III was also looking for more representation in books. He was fortunate to have an African-American children’s book store in his city, and when he went there he was amazed to see many titles featuring characters that he could relate to. He wanted to connect with other Black boys who loved to read, and asked the book store if he could start a book club specifically for Black boys. He started Books n Bros, a monthly book club for young men specifically in his community, which quickly grew far beyond his city. He now has over 150 boys in the club, from across the United States, and the club meets online so kids from anywhere can participate. It also has a non-profit side which allows people to sponsor memberships to the book club so that anyone can participate, no matter their income. Sidney is such an inspiring young person that Disney+ included him in their documentary series about real-life superheroes! Like Marley, Sidney is committed to ensuring that young Black men see themselves in stories, because he too knows that representation matters.

If you could have a superpower for a day that could make the world a better place, what would your power be? What are some of your favorite stories featuring characters of color?

Closing prayer: Dear God, We all have the potential to be superheroes. Help us find our super powers and use them for good. Amen.