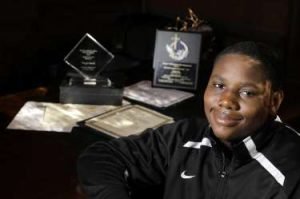 One of the things that many of us take for granted is learning how to swim. But knowing how to swim (or having access to places to learn) isn’t the case for everyone, and it can be a big problem in parts of the country that experience hurricanes, tropical storms, and floods. In 2017, Hurricane Harvey attacked Louisiana and Texas, flooding communities across the states. In many predominantly Black communities, many of the residents do not know how to swim, and this was true in Hitchcock, Texas. But quiet, video-game-loving teen Virgil Smith did, and when a friend contacted him for help during the storm which had turned into a flash flood, Virgil sprung into action. In an act of incredible bravery, using an air mattress as a flotation device, Virgil swam through his flooded community and rescued 17 people who were stranded in their homes and unable to swim. Tirelessly, Virgil helped the elderly, a mother and her infant, his friend’s entire family, and more. Virgil doesn’t consider himself a hero, he just “felt it was the right thing to do,” but certainly the 17 people whose lives he saved feel otherwise.

To learn more about why Black people are less likely to know how to swim (which has to do with racism, classism and segregation): https://www.youtube.com/watch?v=zjC2Ucpr__E

Where do you think Virgil’s bravery came from? Have you ever done something that felt really brave to you? Is there something you say or do when you need to feel brave?

Closing prayer: Dear God, When times are tough, may we have the bravery and determination of Virgil Smith. Amen.