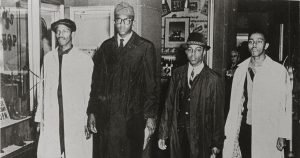 As we know, the road to racial justice is a long one, and still going on today. Many key events in the Civil Rights movement were started by young people, such as Claudette Colvin’s refusal to give up her seat to a white passenger, or Ruby Bridge’s integrating a all-white school. Another part of Civil Rights movement was sit-ins, where Black people went to “whites only” spaces such as pools, parks, or dining counters and sat there in peaceful protest. One of the first sit ins took place in Greensboro, North Carolina in 1960, when four Black college students, Joseph McNeil, Franklin McCain, Ezell Blair Jr., and David Richmond, inspired by Ghandi and aching to make a difference in the fight for Civil Rights, went to a local Woolworth’s “whites only” lunch counter and asked to be served. They were denied service, but did not leave. Police were called in, but could do nothing, as the young men were causing no disruption. The 4 returned the following day, and the day after that, each time asking to be served, being denied, and then staying there. Over time, more college students, Black and white, joined their cause, and staged sit-ins at other local businesses. During this time, the peaceful protestors were relentlessly verbally abused, heckled and even assaulted by white customers, but they remained impassive, quietly studying and working on coursework. From February until the end of July, the sit-ins continued, until finally, stores began serving Black customers at the same counters as white customers. The sit-ins, started by the brave Joseph, Franklin, Ezell, and David, had done their job.

To learn more about the Greensboro 4: https://www.youtube.com/watch?v=uFQ3ZCAgAA0

Closing prayer: Dear God, The fight for racial equality is not finished. Let us be strong and continue to fight. Amen.