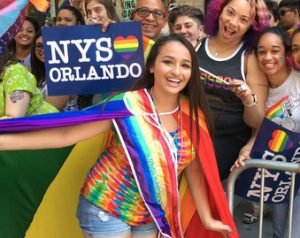 Jazz Jennings is not the first transgender activist we have talked about during our Lenten series, but she is arguably the most famous young person who is transgender (where the gender a person knows they are in their mind and heart may not match with their chromosomes or body parts). According to her parents, even though she was born with traditionally “male” body parts, Jazz identified as a girl as soon as she could talk. In 2007 (which isn’t that long ago, but is quite early in the fight for transgender visibility among young people), 7-year-old Jazz was interviewed by Barbara Walters, and families with children outside the gender binary got an incredible advocate, cheerleader and role model. Since then, Jazz has hosted tv shows, written a book, has a reality show, and continues to be one of the loudest and proudest voices in support of young people’s understanding of their gender identity. Jazz is an ally to all.

Jazz started telling her parents that she wasn’t a boy, she was a girl, as soon as she could talk. She always knew, and she was lucky her parents trusted her to know her own identity. Have you ever tried to tell adults something and felt like they didn’t listen to you or didn’t trust you because you were a kid? How did it feel? How does it feel when an adult does listen to you and believe you?

Closing prayer: Dear God, Let us listen to the voices of the young. They hold much wisdom. Amen.