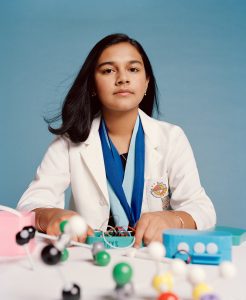 When she was only 10, budding scientist Gitanjali Rao heard about the water crisis in Flint, Michigan, where the entire city’s water supply was so contaminated with lead that none of it was safe to drink or cook with.  Even though Gitanjali does not live in Flint and was not directly affected by this, she knows that water is a requirement for life, and she wanted to help. Already quite accomplished in different areas of STEM (science, technology, engineering and math) Gitanjali was able to develop a tool that could measure lead levels in water and communicate that to people via Bluetooth, letting not only individuals, but entire communities know whether their water was safe to drink. Gitanjali was able to work with 3M to produce this product on a large scale, and because of her work, was named Time Magazine’s first ever Kid of the Year. Gitanjali has also created an app that can detect and warn parents and teachers of early stages of cyberbullying that their kids may be engaging in or victims of. Gitanjali is using her skills and talents to impact change in multiple ways!

Gitanjali has used her skills and resources to create solutions for multiple problems! If you could be a part of solving 2 problems in the world, what would you want to work on?

Gitanjali is lucky to have access to lots of cool adults who believe in her and helped her ideas become reality. Who are some adults you know who could help you solve problems?

Closing prayer: Dear God, help us to always look for ways to make changes in the world, whether they impact us or not, for we are ALL connected. Amen.